Congratulations to Dr. Parmeggiani on the recent publication of Of Elephants and Toothaches: Ethics, Politics, and Religion in Krzysztof Kieślowski’s Decalogue with Fordham University Press 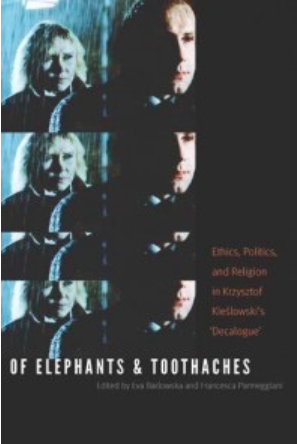 Fordham University Press has recently published Of Elephants and Toothaches: Ethics, Politics, and Religion in Krzysztof Kieślowski’s Decalogue, a collection of critical essays on The Decalogue, a 1989 film cycle based on the Ten Commandments, directed by Krzysztof Kieślowski for Polish television. Edited by Eva Badowska (English) and Francesca Parmeggiani (Modern Languages and Literatures), both at Fordham University, the collection includes essays by Fordham’s faculty and US and European scholars. Dr. Parmeggiani’s own essay is entitled “Decalogue Seven: A Tale of Love, Failing Words, and Moving Images.”

“This collection is the first to offer a genuinely interdisciplinary approach to Krzysztof Kieślowski’s Decalogue, a ten-film cycle of modern tales that touch on the ethical dilemmas of the Ten Commandments. The cycle’s deft handling of moral ambiguity and inventive technique established Kieślowski as a major international director.

Kieślowski once said, “Both the deep believer and the habitual skeptic experience toothaches in exactly the same way.” Of Elephants and Toothaches takes seriously the range of thought, from theological to skeptical, condensed in the cycle’s quite human tales. Bringing together scholars of film, philosophy, literature, and several religions, the volume ranges from individual responsibility, to religion in modernity, to familial bonds, to human desire and material greed. It explores Kieślowski’s cycle as it relentlessly solicits an ethical response that stimulates both inner disquiet and interpersonal dialogue.”

« “Spanish & NYC Course – one of the most eye-opening and favorite classes during my time at Fordham.”
Tuesday, September 13 @ 6 pm (LC): Robert Pinsky presents his translation of Dante’s Inferno »